Choosing a wireless router can be both tricky and discouraging. Not only are there so many to choose from, but you also need to consider what you need. You will want a router that delivers fast, reliable Wi-Fi with excellent coverage.

But how do you know which one is the best?

Manufacturers usually describe their routers with words that no one can understand. It also has very little to do with the real-life experience you get when buying their routers. The name of a router seldom says how good the router is or the price you pay.

Asus is mostly known as a brand that produces high-performing gaming gear. You know, all the gear that the famous streamers use to improve their gaming. But this isn’t the only department in which ASUS shines. Now the Taiwanese giant has impressed us yet again.

While their first batch of routers were quickly brushed under the carpet, new features have resulted in one of the best routers available. As you will find out in our in-depth ASUS RT-AC88U Wireless-AC3100 Review. 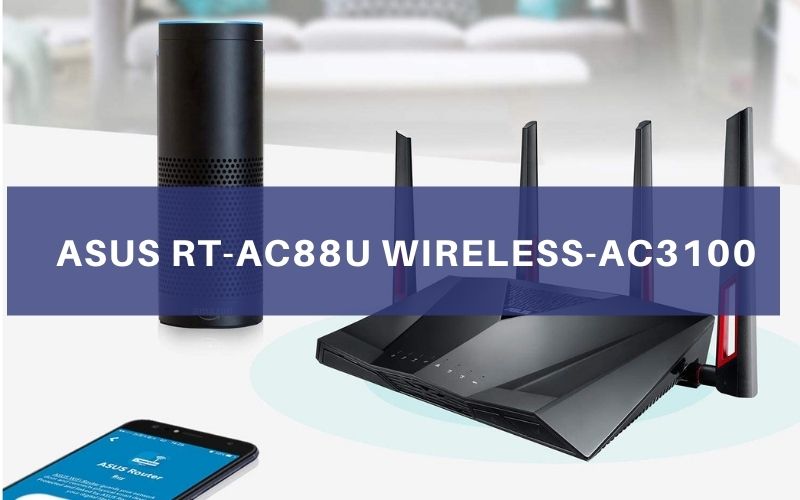 The RT-AC88U is the best of the best. It is well known among hardcore gamers and streamers around the world and even achieved the nickname ‘Extreme.’ If you regularly stream in 4k, this router is a great option for you. We absolutely fell in love with it, and we think you will as well!

Like most Asus products, the design looks amazing. We know you are not reading this for the aesthetic value, but isn’t this one of the coolest routers you have ever seen? From the iconic red stripes to the matt black finish, it looks like something out of a transformer movie.

So, let’s find out more, starting with a…

We tested the RT-AC88U in five different metrics. Ease of use, features, 2.4Ghz. Throughput, 5GHz. Throughput and Range to see how well it performed.

Features of a good router…

A good router should have certain features. When we tested the RT-AC88U, we considered the following: MU-MIMO, beamforming, the ability to turn on/off LEDs, the number of LAN and USB ports, and the ability to reset the router wirelessly.

The RT-AC88U did very well and checked for most of the features we were looking for, 8 out of 10, to be specific. That is very impressive compared to most other routers. 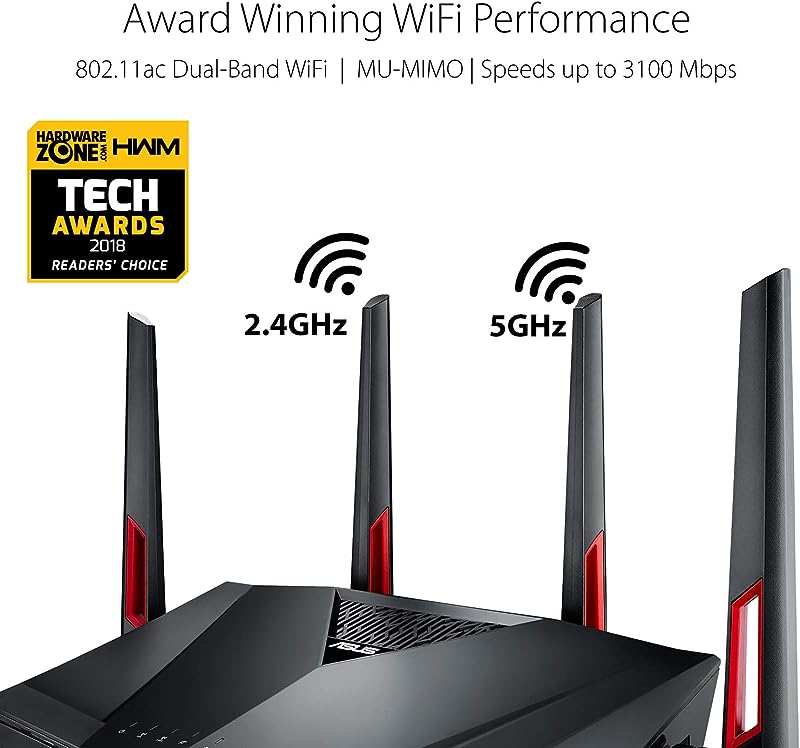 Something we immediately noticed was that it had both MU-MIMO and beamforming capabilities. Which is a huge plus, but should be expected of a router of this quality. We won’t go into detail and explain what these features do, but in short, they dramatically increase the overall speed of your network. Especially if there are multiple devices connected to your network.

The RT-AC88U is dual-band, meaning it has both 2.4GHZ. and 5GHz. capabilities and follows the 802.11ac wireless specification. It also supports IPv6. When it comes to security, it supports WPA/WPA2 Personal, WPA/WPA2 Enterprise, WEP, TKIP, and AES Encryptions. It also has 512 MB DDR3 of RAM. It also lets you set up an unsecured guest network, and it has a built-in VPN network.

Next, we took a look at the reset features…

To be able to remotely reset the router is very handy if you are planning to store it in an out-of-the-way location. Turning the power on and off is usually the first step to solve connectivity issues. If you can do it remotely, it allows you to store the router in a concealed location. We also tested if we could control the brightness of the LEDs, finding that you can easily turn off all of them with a button on the front of the router.

All of these features can also be controlled from either a web browser interface or an app that can easily be downloaded to your smartphone. The RT-AC88U has no less than 8 LAN ports, allowing you to connect multiple devices. There are also two USB ports, as well as one USB 2.0 and one USB 3.0.

The next test was to see how easy it is to use the product. We also took a look at how intuitive and user-friendly the interface is, if it is easy to implement parental controls and if it has QoS capabilities. The RT-AC88U performed excellently in 9 out of 10 tests.

It did, however, require a software update out of the box, which was relatively easy. It was also very easy to go through the initial network setup. We did run into an occasional issue with the automatic wizard, and we found that it was easier to use the browser-based interface.

The interface is very straightforward. The RT-AC88U features parental controls, which were pretty easy to set up as well. It did, however, take a little bit of time locating this feature in the menus.

We really liked that the content controls gave us a lot of versatility, allowing us to restrict content by genre, rather than having to enter the web address of every site you want to block. We were also able to limit internet access by time, and you can set specific devices to access the internet at certain times.

The Asus also gives you the option to set up guest networks. You can enable up to six and leave them unsecured or set a password for each one. You can also set how long the internet is available through these networks.

And yes, the RT-AC88U has QoS (Quality of Service). It actually had one of the easiest implementations that we have ever seen. There are three main choices. Adaptive, traditional, or bandwidth limiter.

For adaptive, you can select what mode best suits you. Even here, there are three choices, gaming, media streaming, or web surfing. Another great feature is that it will automatically prioritize devices and optimize your network.

Traditional lets you manually set the device priority, and the bandwidth limiter allows you to limit the maximum upload/download speed for each device. 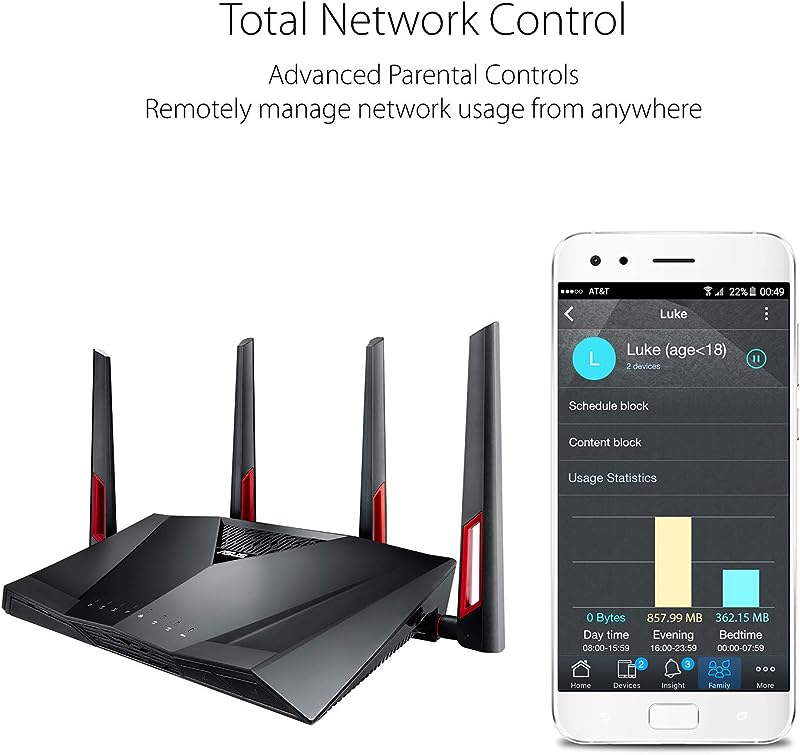 This metric tells you how quickly the RT-AC88U can transmit data over the 2.4GHz band, and the Asus did really well. If we have to give it a score, we would give it 7 out of 10. This may seem low, but most routers we have tested score even lower.

To determine our tests, we used the iPerf3 software and did five different tests on each bandwidth.

We started with a short distance test, with about 10 feet between the router and computer. The RT-AC88U did excellent in the line of sight version of the test and had an average throughput of 51 Mbits/s. It didn’t do quite as well in the obstructed version of the test with a wall between the router and computer, resulting in a slight drop in performance.

The RT-AC88U performed quite well in the medium range test, delivering about 39 Mbits/s in the line of sight. We set the distance to about 35 feet between the router and the computer. In the obstructed test, we had both a wall and a solid door blocking the signal. The Asus was pretty unaffected by this, clocking in at 38Mbits/s.

The last test was the long-distance test. We separated router and computer with about 70 feet, with some walls obstructing the signal. The RT-AC88U still delivered an average of 27 Mbits/s.

We used the same setup and distances for the 5GHz test as we did for the 2.4Ghz. Although the RT-AC88U didn’t impress much in the short distance line of sight test, it did a lot better in the obstructed version of the test.

It performed decently in the medium distance test as well. The line of sight test saw the RT-AC88U clocking in at 204 Mbits/s and 186 Mbits/s in the obstructed test.

For the long-distance test, the RT-AC88U did very well, delivering an average speed of 37 Mbits/s.

Our final metric was the Range. To test this, we randomly selected a 5 min YouTube video and streamed it on our computer at set distances in 720p and took notice when the stream was interrupted. The RT-AC88U did excellently and didn’t interrupt the stream until we reached a whopping 158 feet. 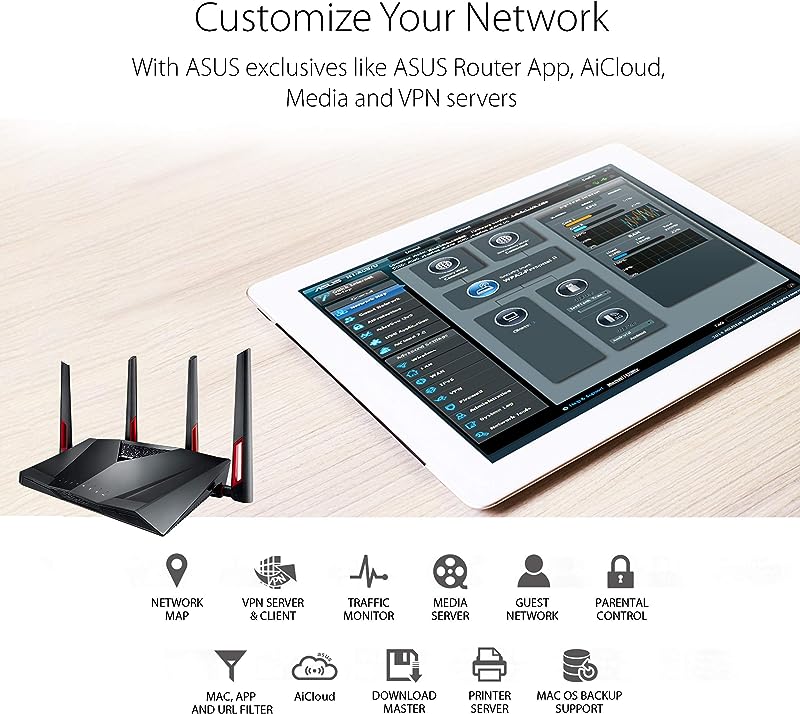 If so, take a look at our Best RX 580 Graphics Card review, our Best Wireless Wii Sensor Bar reviews, or our Best Racing Wheel reviews available in 2022.

Or, f you’re building your perfect gaming system, check out our Best Full Tower Case reviews or our Best Mini Cases reviews! You might also enjoy our Best Sound Card reviews. Or, if you’re transferring a load of data, we highly recommend our Best Hard Drive Duplicator Docking Station reviews.

Or, if you need to uncover some long lost secrets from old floppies, our Best External USB Floppy Drive reviews might be very useful.

All in all, the Asus RT-AC88U is a top-performing router. It is actually one of the best routers we have ever tested. It is undeniably easy to use and to set up, and it is also jam-packed with features.

It performed excellently in our tests, and the performance standards will be more than enough for most users.

However, it is costly and might be too expensive for some. It also has a lot of features and functions that you might not need when shopping on a budget. But, that said, if you want a quality router, it offers good value for money.

Not many routers on the market today can match the ASUS RT-AC88U. It is truly a wireless router that rules all others. And if you want the best of the best, you will need to pay for it.