The DJI Phantom is probably the most recognizable consumer drone there is, with earlier versions being seen in everything from The Big Bang Theory to South Park. Unlike the earlier drones that were seen more like toys, the Phantom’s development has always put video and still photography at the center of the drone’s purpose.

To help you decide whether or not the DJI Phantom 4 Pro Plus V2.0 is right for your, let’s take a closer look at its history, features, and pros & cons in our comprehensive product review… 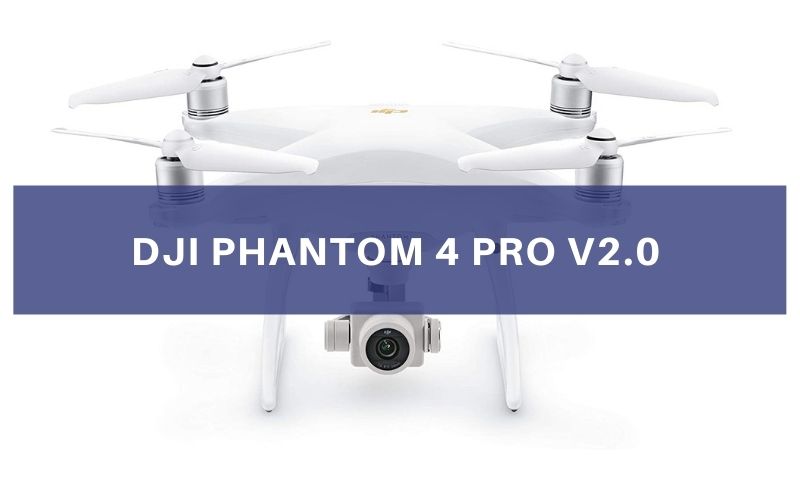 The first Phantom was released in 2013, but in a rapid run of updates and a confusing array of edition names, DJI added 3-axis stabilization, GPS, improved control range, 4K camera, collision sensors, and support DJI’s FPV goggles. In all this time, the Phantom’s basic shape remains almost the same, it looks a bit smoother now, and the red taped stripes on the front legs are shed, utilizing a cleaner look.

In addition, DJI introduced the Phantom 4 Pro Plus v2.0, which has a built-in screen on the remote and is the version we will be reviewing here.

Even though the Phantom doesn’t occupy all of DJI’s attention anymore, it’s still one of their flagships. The larger size, which will still travel comfortably in a dedicated backpack, makes the drone more resistant to windy conditions than some foldable drones in the line-up. And which makes it possible for the Phantom to have a fully stabilized 1-inch R sensor.

DJI is maddingly inconsistent with placing their collision sensors, with none of them yet avoiding objects when traveling in any direction. Still, the Pro Plus V2.0 has added sensors on both sides and front, back, and bottom. So, the only way to fly into an obstacle is upward.

The Inspire 2 has top sensors but none on the sides. Underneath, two ultrasonic sensors detect the proximity to the ground, enabling automatic landing, and two cameras, which help avoid drift when flying indoors without GPS.

What about the features?

Apart from the sensors, the fuselage remains simple in design. It’s equipped with a microSD slot and a micro-USB socket on one side, and a slot for the intelligent battery at the back. In-flight, the battery status lights are turned on, which is handy if you’re flying nearby, but their real utility is letting you know when the charging is done. The charging is quick, even though the battery can be tricky to get out.

The camera’s gimbal has three-axis powered stabilization and works together with the drone’s software so that the movement in flight is smoothened, which is essential for good video.

Controlling and Flying the Phantom Pro Plus V2.0

If it’s the first time you are looking at a drone, we should point out that the control-scheme varies from the mechanical explanation. You can tilt the gimbal using a control wheel on the controller’s side, but in every other aspect, the camera’s direction is determined by the direction the drone is heading.

It would be pointless for the camera to rotate any further than its yaw stabilization since the fixed legs would come into the picture. But if you’re used to piloting a drone, there isn’t any reason why you can’t simply rotate the drone in flight.

What about the controls?

Flying is controlled using two sticks. The left stick flies the drone in any direction, and the right stick either rotates the drone or climbs/descends. It all comes naturally, and the drone will do everything it can to make the process easier. Assuming you’re outdoors, the combination of GPS, GLONASS sensors, and altitude sensors will make the drone hover in place as soon as you let go of the sticks.

The Pro Plus V2.0 hides attitude sensors and a compass inside the drone, telling you if it’s level or not, so flying is the least of any photographer’s worries. Furthermore, the drone handles like a dream, it looks like a high-tech cow, but pull the stick as far back as possible, and the drone weighing only 1388g will shoot across the sky at an astounding 45mph with incredible acceleration.

But what makes the V2.0 special?

As you can guess, most of the discussed features are shared with the Phantom 4 Pro. The V2.0 is a bit quieter to fly, but it’s still a pretty noisy drone compared to others. Also, the V2.0 has OcuSync, a video system that reduces transmission latency, though not by much, and it supports the use of DJI’s FPV goggles.

Oh, and don’t forget it’s 13g lighter than the Phantom Pro 4. It’s still not getting anywhere near getting under the 250g weight you need to register.

The Pro v2 and Pro Plus V2 are capable of recording video at a superior 100Mbps, compared to 60Mpbs on older drones, and in a great range of resolutions topping at Cinema 4K at 60fps. Super slow-mo is available at 1080p at 120fps. You can also capture video in H.265 or H.264, meaning that the data-rate is working even harder, not bad considering the number of details in aerial videos.

The mechanical shutter shows its worth, even when the drone is in motion, eliminating the rolling shutter. If we have to mention any flaw on the camera, it’s the fixed focal length 24mm EFL lens. Since wide shots are an essential part of aerial photography, pleasingly, DJI cameras are amongst those that include Camera RAW presets.

Surprisingly, it doesn’t offer zoom, which is available on significantly cheaper drones, like the Mavic 2 Pro.

Even without a zoom…

Shooting 4K in Auto mode looks great. Shooting in 1080p and other formats also look good, and some drones create unforgivable pixel patterns at lower resolutions, but not the Pro Plus V2.0. Stills photographers don’t lack options either. The vast array of options can sometimes be overwhelming, but that’s hardly a unique problem specific for DJI.

The issue is highlighted, though, by the time limit enforced by the batteries. It’s true that 30 mins is among the top flight times available. But if you’re not familiar with drone flight times, you should know that the accepted comparison time is based on hovering with no wind. The time is obviously reduced by fast movements, climbing, and descending, But we still got a good 27 min of flight time.

What about the software? 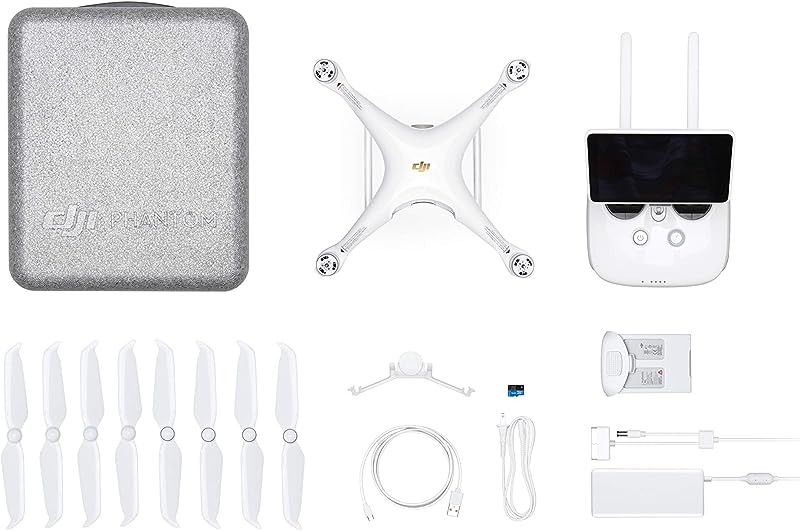 The software is very good at letting you know how much time you have left. And it displays that graphically against how long it takes to fly back. The graph is adjusted after each bit of battery-draining high-speed piloting. And, in the worst case, the drone will automatically decide to head home to the take-off point if there’s enough power left—a great implemented feature.

The camera offers full manual options, with an array of different modes. And you can screw on an ND filter if you want.

The Pro Plus has a built-in 5.5-inch screen. But you can also get the Phantom with a bracket to clip your smartphone or phablet too. The built-in screen is a stripped-down Android phone. But one that DJI can’t blame issues on other manufacturers for. The screen is excellent, even though 5.5-inches is a bit disappointing compared to the iPad Mini. But the screen is bright and clear.

Despite the small screen…

The caution and warning messages didn’t seem as intrusive as on the Mavic 2 Pro. The menus occupy the whole right-half of the screen, so you best set what you need before take-off. But overall, we were pleasantly surprised by what could be achieved on a 5.5-inch screen.

The Pro Plus also has several flight modes to contend with, some more useful than others. The ability to track a subject that you outline, i.e., a person, is kept in focus at all times. DJI also included their gesture controls. All of the included flight modes are nice to have. But ultimately, you need to remember all of them and what they do. Active-track aside, in most cases, you’d probably be better off training on your own.

Pros And Cons Of DJI Phantom 4 Pro Plus V2.0

Do You Love Tech And Gadgets? 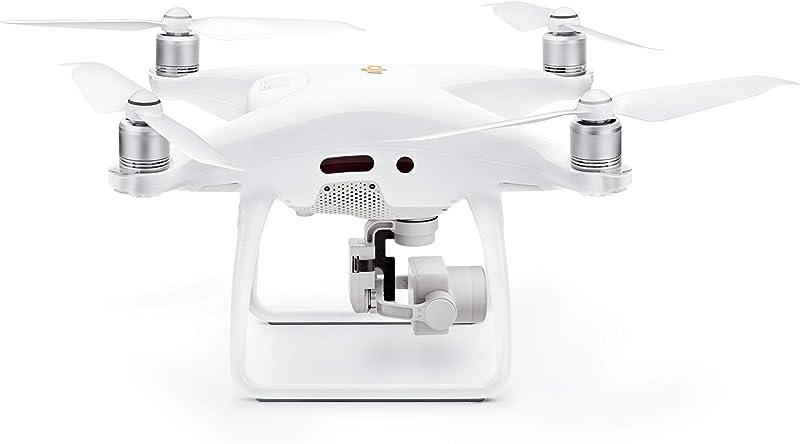 And before you leave, pop on over and read our Best Wall Mounted Surge Protectors Review, our Best Wireless Access Points Review, our Aukey DR02 FHD 1080p Dash Cam Review, and our Best Under-Desk Keyboard Tray Reviews for 2022.

The Phantom 4 Pro Plus V2.0 is a stunning piece of technology. But still, it feels a bit like a stopgap because of the other drones offered by DJI. The intelligent flight modes and collision sensors are nice to have. But the show’s star is the camera with a 1-inch sensor, 100Mbps 4K recording, f2.8 lens, 11.6 stops of dynamic range, and 1/2000 sec mechanical shutter.

The same camera is included in the Pro V2.0 and V1 version. So it could be worth checking out those models’ prices if image quality is your only concern over the latest models’ upgrades. V2 or not, Plus or not, the camera is a real beauty. And if you’re used to flying smaller drones with smaller image sensors, this will truly blow you away.

Despite a few setbacks, the fuselage is solid and steady, and the balance between portability and quality will appeal to many.

We can highly recommend it. Happy droning!