The PC gaming community has seen a shift in recent years away from oversized mechanical keyboards to smaller options that have the NUM pad removed completely. And for good reason, as from a gaming perspective, the NUM pad has almost zero functionality.

With the phenomenal rise of eSports in the last decade, it’s no surprise that tech companies have started to release peripherals aimed squarely at gamers with more frequency and intensity. 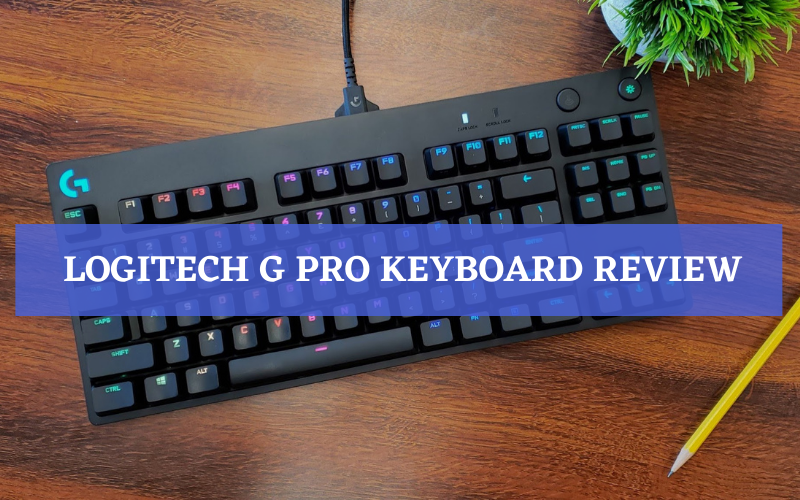 A leader in the field…

Among these companies, Logitech has reigned supreme for the last few years. And with the introduction of their “Pro” line of keyboards, that reign looks to be continued! With more and more consumers interested in matching the best eSport athletes setups, Logitech have made their intentions known by producing an outstanding keyboard fit for everyone.

But is it the best mechanical keyboard for gaming? Let’s find out in our in-depth Logitech G Pro Keyboard Review… 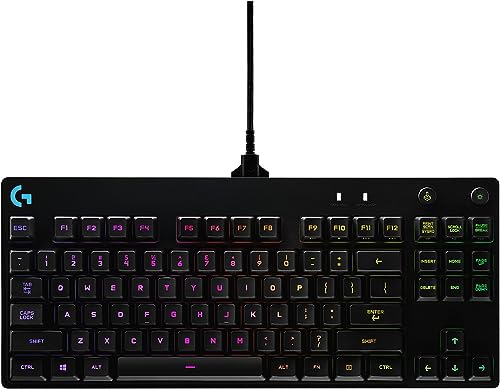 As mentioned in the intro, the first thing we noticed on the Logitech G Pro Keyboard was the lack of any NUM pad. Logitech did extensive market research before producing this “Pro” line, and the overwhelming response that the best compact keyboard was better.

The NUM pad is pretty much useless to gamers, but the ease of transport and extra room for mouse movement ranked highly. After almost a month of using this keyboard, we agree with this design choice. The extra space for our mouse hand adds more to the experience. 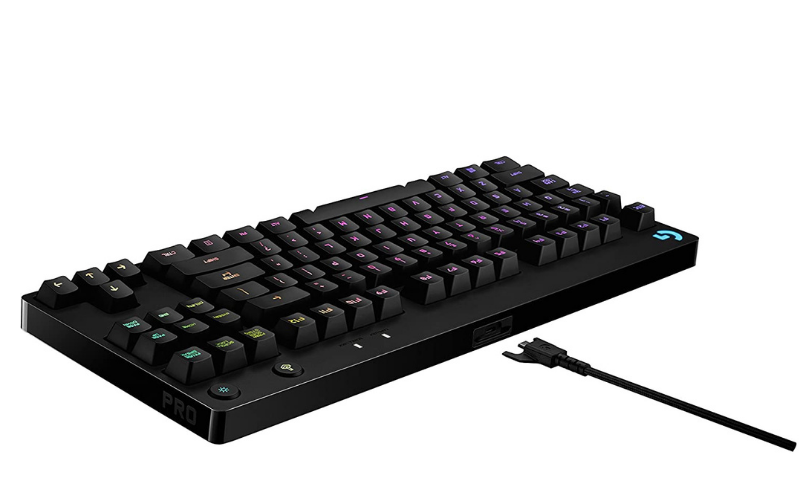 Logitech has also decided on scrapping all the macro function keys we are all used to seeing these days. Instead, assigning them to the function buttons with the use of the Fn key.

This took a little getting used to, and it could at times be slightly annoying, but overall it is hard to fault the design team’s decision here.

Designed with gaming in mind…

Except for volume controls, the macro keys are of almost no importance during gaming sessions. Most players will be using a dedicated gaming headset that gives you all the sound control you could ever need.

One key addition that we loved was the “Gaming” key. When this key is activated, the alt, tab, and windows keys are all blocked to make sure you don’t accidentally quit during a gaming session.

The G Pro ships with a fully braided, detachable micro-USB cord that is high quality. The choice of making this detachable should be applauded, and one that we would like to see across the board. The cord is often the first thing to break on a keyboard, so it’s nice to see it easily replaced.

Everyone at the office loves the looks of this keyboard. Minimalist, sleek, and elegant in equal portions. Adding to this feeling is the RGB LED lighting setup.

Logitech have gone all out here, and it really shows. Each separate key has an RGB LED hidden underneath, which can be controlled independently. Simply download the “G-HUB” app, and you have all that control at your fingertips.

Make it your own…

Creativity is the name of the game here, with so many options available to users. Setup each key with whatever color light you desire, create your own animated transitions, or simply go with one of the seemingly endless preloaded themes. The choice is in the user’s hands, and we love it.

The G Pro has two different incline settings. At the lower end of the scale, it sits at about 4 degrees, with the second sitting position at 8’ish degrees. Unfortunately, there is no included wrist rest.

Anyone who has used one of Logitech’s gaming keyboards before will be familiar with the Romer-G mechanical switches. An alternative to the industry standard MX Cherry Brown keys, the Romer-G switches are super tactile without being overly clicky.

Logitech claims that these keys are a whisker faster than the MX’s, as well as being more durable and responsive. These claims are pretty hard to test over just a month’s usage, but to us, they feel fantastic.

And while this might be one of the best gaming keyboards you can buy, the low actuation force for the keys also makes it a dream to type on. Mechanical keyboards are inherently louder than your everyday setup. 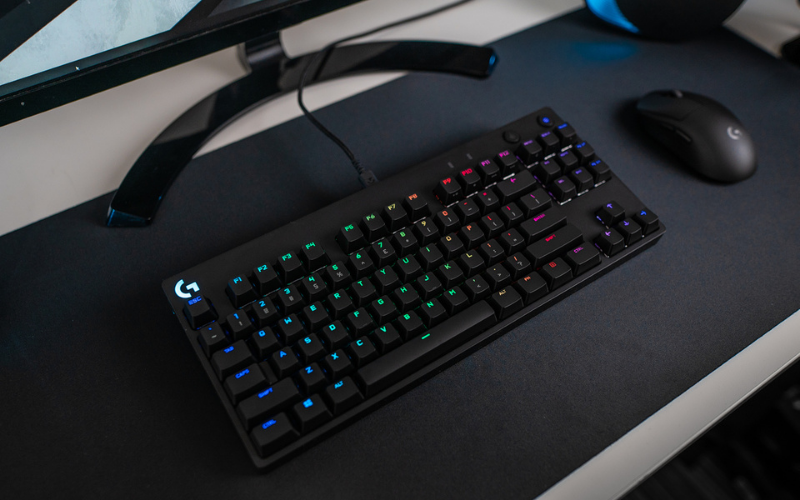 The tactile feeling mixed with the audible click is satisfying but can become a little tiresome for typing. That’s not the case here, with the Romer-G keys being on the quieter end of the scale. In fact, it could be one of the best quiet keyboards out there.

We briefly mentioned the G-HUB app earlier, but let’s go into a little more depth. The Logitech G Pro Keyboard offers RGB lighting and has one big advantage over many of its competitors.

What’s this, you ask?

“Through the center” lighting with keys that sit perfectly flush with the base. This eliminates any possible light bleed issues by containing all the emitted light inside each key itself. Not everyone is going to be a fan of this, with light bleed being seen as a plus by some users.

For us, though, this was one of the main advantages of the lighting setup. There is also the option to save your favorite lighting preset to the keyboard itself. Meaning that it’s always available regardless of which PC the keyboard is plugged into.

Macro key placement is also set through the G-HUB software and gives you full control over which F key is responsible for which function.

Over the past month, we put the Logitech G Pro through the wringer, testing with a wide array of AAA titles and some indie games. GTA V online is a favorite of ours, and this keyboard proved itself with all aspects of this game feeling in tune with our keyed inputs.

Battlefield I was just as responsive, with kills coming easily when playing both a run and gun style and while sniping. Vehicle controls were easily dialed in. 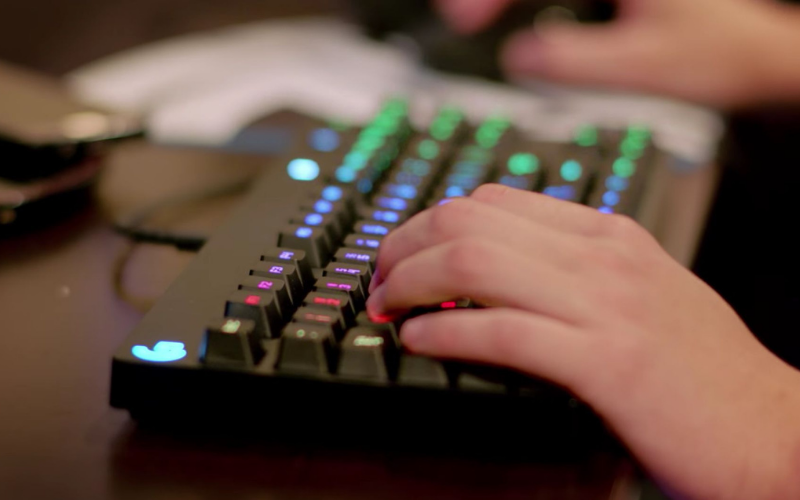 The compact size of the Logitech G Pro was more impactful than we would have originally guessed. Being able to easily switch between having the board directly in front or off to a slight angle without the mouse or monitor getting in the way was a big plus.

Looking for Something Else?

Also, take a look at our Best Gaming Glasses Review and our Best Membrane Keyboards Review for some of the latest gear on the market.

The Logitech G Pro is a beast. Designed to be not only easy to use but also durable with fantastic lighting options. This keyboard stands above most of the crowd. The size is definitely polarising, with some users sure to miss the NUM pad and macro keys.

But, if you are like us, with these keys being of little importance, then we’re certain you’ll love this handy, portable, and satisfying mechanical keyboard! So, click right here to find deals on one of the best Logitech keyboards on the market.

Until next time, it’s always game on. 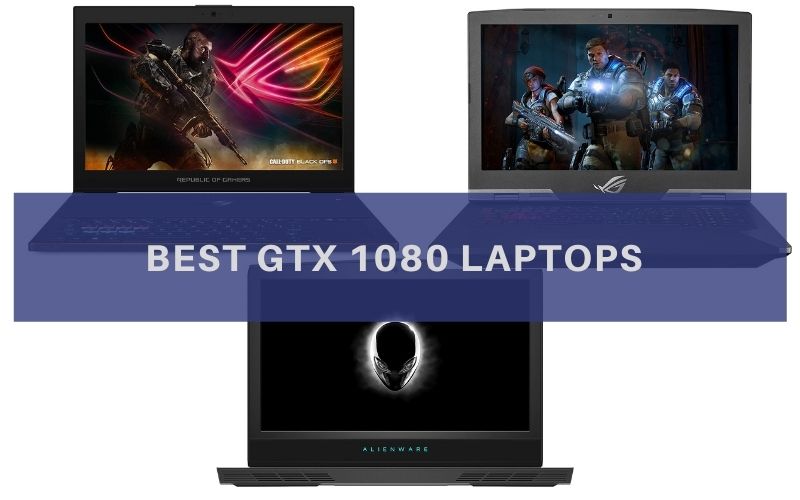 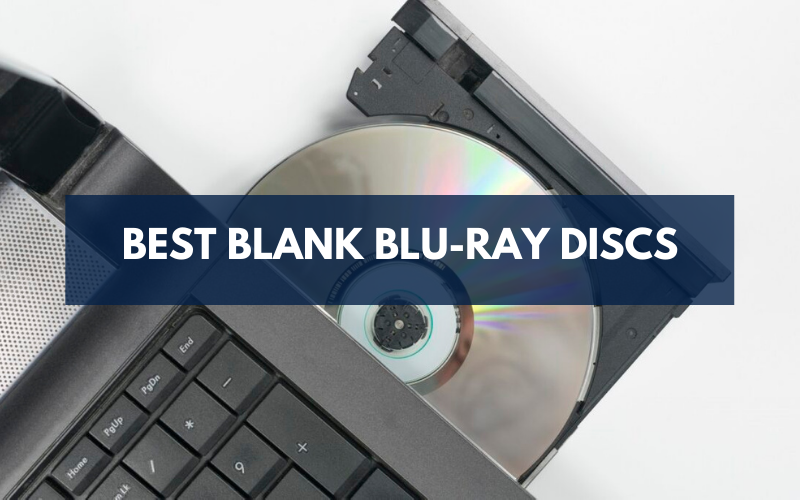 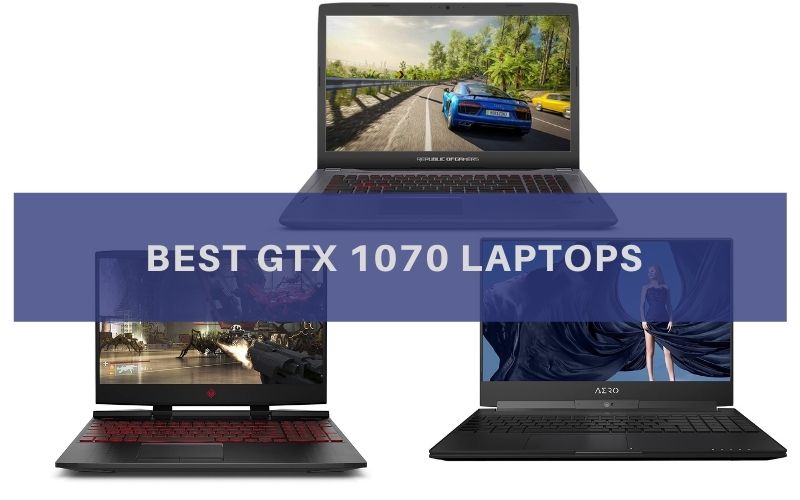 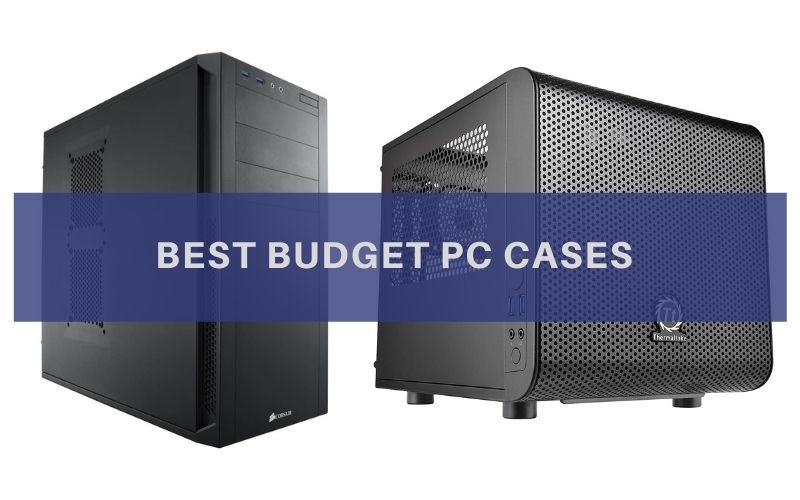