Drones are fun to fly, but they aren’t generally educational. The Ryze Tech Trello aims to be both by permitting you to control the drone either by using an app or using a Bluetooth remote. You can even program the drone using Scratch, which is an open-source programming language developed by MIT.

The simple but yet powerful language allows you to write programs by dragging and dropping blocks of code, almost like building a Lego model. However, while the drone is fun and simple to fly, the programming could be improved.

Intrigued? We thought you might be, so let’s find out more in our in-depth Ryze Tech Tello Review… 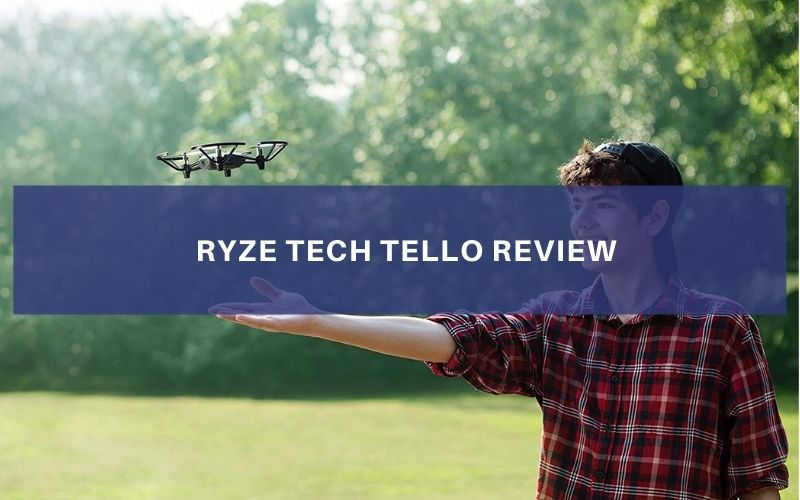 The Result Of An Outstanding Collaboration

The Ryze Trello results from the collaboration between leading consumer drone manufacturer DJI and the fellow Chinese startup, Ryze. Being a simple, lightweight, and affordable quadcopter, the Tello was clearly designed for beginners and newcomers to the hobby.

Even though it’s budget-friendly, it comes equipped with an onboard nose-mounted camera, capable of capturing 5MP photos and streaming 720p HD video.

You can fly a good 13 minutes per fully charged battery, and stability sensors (theoretically, at least) help you from drifting into walls, shrubberies, and neighbor’s gardens. In other words, it hasn’t been stripped entirely to the bone to keep costs down, and even though the plastic body, which we wouldn’t call premium by any means, feels robust enough to survive a minor crash or two.

If you choose to control the drone through a Wi-Fi-equipped smartphone operating the Tello app, the drone has a control range of 100m, a maximum altitude of 30m, and a top speed of 8 m/s, in theory at least. The app includes automatic take-off and landing controls, plus an on-screen twin-stick setup that feels incredibly responsive.

The Ryze Tello is entertaining to fly, especially if you’re outside with room to spare. It zips along at an enjoyable speed and responds incredibly well to the on-screen controls, twisting and turning in the air with surprising finesse.

It would be best if you kept in mind that all of the above only applies during exceptional weather. On a breezy day, the lightweight drone, weighing only 80g, easily gets swept away by the slightest wind gust, and it tends to struggle when moving against the wind as well. We would only recommend flying it on a perfectly still day.

Should you consider taking it out for a flight in windy conditions, make sure you have plenty of space – otherwise, you will undoubtedly find yourself crashing into a tree or being carried off and lost entirely. That being said, it’s incredibly challenging and fun to fly in those conditions. And you get to show your skills as a pilot.

But let’s get back to the range…

Earlier, we were mentioning the theoretical range of “up to 100m”, but you will never see the drone approach that in reality. The maximum range we could actually control the drone at was more likely 30-40m. There are limits to the altitude as well. Ryze claims it can reach heights of 30m, but it is more likely around 10m; above that, it became tough to control.

Even though this range might seem a little restrictive, it’s acceptable for a basic budget drone with a simple, forward-facing camera. Because let’s be honest, you won’t be using this drone to capture sweeping aerial landscape photos, but more likely close-range selfies and group shots.

A few neat tricks up its sleeve… 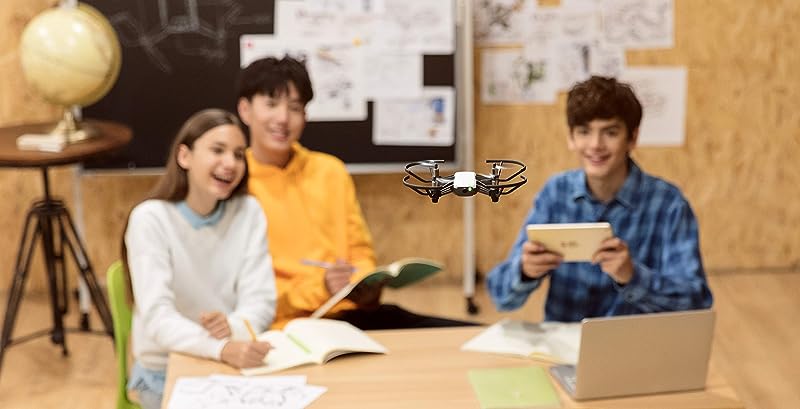 If you’re flying on a calm day or indoors (prop guards are included for the latter, and you may as well keep them attached during outdoor flights), a pair of downward-facing sensors keep the drone nice and steady. Should you take your hands off the control, it will hover nicely in place rather than drift around. This system is, however, light-based and only works in the best of conditions.

You can hold out your hand and let the drone land on your outstretched palm (but watch your fingers until the propellers power down). Another neat function is “Throw & Go.” Turn the power on, then throw it upwards in the air and away from you, at which point it will engage its rotors and hover in place.

In addition to the manual flight controls, there is a handful of automated modes that you can use to perform tricks and capture exciting videos. Other methods include 360-degree rotations, Up & Away, which yes, flies up and away while facing you. The most exciting trick is the 8D flips, making the drone perform precise flip-overs that mirror your finger swiping across the screen.

The app is refreshingly simple, with clearly labeled controls and a limited, but not restricted, set of options. It’s equipped with an on-screen battery indicator while flying and a built-in warning system that kicks in when power is low, ensuring that you won’t lose the drone due to it suddenly running out of juice.

The battery life is ok, and you can get as much as 13 minutes of flight time on a single charge. If you’re planning on flying longer sessions, you need to buy extra batteries, but given the drone’s toy-like nature, we think that 13 minutes is more than enough. Another option is to buy the “Boost Combo” package, which includes three batteries and an external charger that can serve all batteries at once.

Last but not least…

We need to mention the image quality of the built-in camera. In all honesty, it’s not the best, lacking dynamic range and, when it comes to videos, often subject to very noticeable compression artifacts. The storage method doesn’t help either, since videos aren’t stored locally on the drone but sent directly to your phone. If the Wi-Fi connection drops in quality, you will experience frame rate issues.

Should You Buy The Ryze Tech Tello? 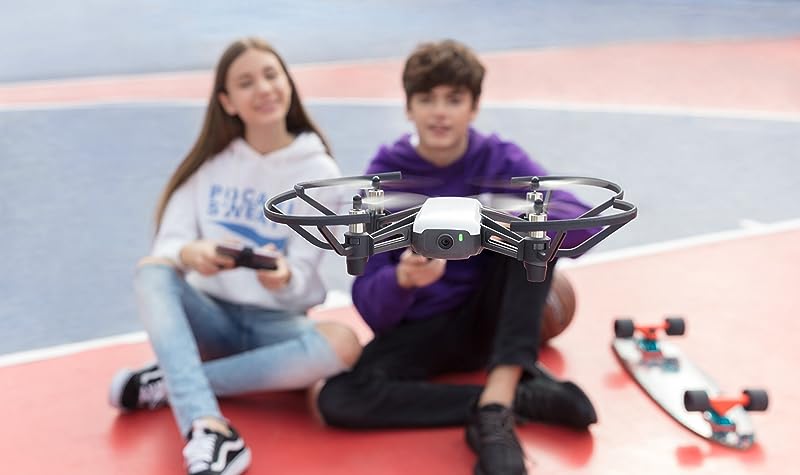 Here are a few pointers if you still are indecisive:

Buy the Ryze Tello if…

The Ryze Tello is extremely fun to fly with responsive controls that work for beginners as well as experienced pilots. The Tello could be dismissed as yet another toy because of its size and price. But it’s so much more than that. It gives you a window into the larger world of drones. The app is easy-to-use and captures nice, even if somewhat jerky, videos.

But if you consider this drone to be a fun way to learn programming, don’t bother. The Scratch feels like an afterthought that was hacked together at the last minute, and it’s very limited and poorly documented.

However, it’s a fantastic buy for anyone thinking about getting their first drone. Or if you already own a drone but want to improve your piloting skills.