It was in late 2017 when Samsung released the long-awaited C32HG70. The buzz within the gaming community had been at the point of almost boiling over for months, with the C32HG70 offering a range of new features previously unseen in the gaming monitor market.

And sure, nowadays, these features are more commonplace, but the Samsung C32HG70 still shines ahead of the pack for a few reasons.

Plus, there’s an added bonus….

Prices on this curvaceous 32-inch gaming screen have never been better. Seriously, the deals now available border on the insane! So, follow us as we take a deep dive into our Samsung C32HG70 Review, which we think is Samsung’s best gaming monitor ever! And probably one of the best gaming monitors ever produced.

The first thing we noticed when unboxing the Samsung C32HG70 was the understated design, especially for a ‘gaming’ monitor. The aesthetic is much more subtle and restrained than we are used to seeing in this category of screens. Although once we plugged the screen in, the C32HG70’s arena lighting feature lit up the wall behind.

We hadn’t got around to reading the manual at this point, so the light show was a bit of a surprise. The pulsating and color-changing LEDs do a good job of adding to the atmosphere in our little gaming cave.

The triangular based stand has all the swivel and tilt you could ever want or need. With a swivel range of -15° to 15° and a tilt range of -15° to 5°, and the action is easy and smooth. There is an annoyingly long arm protruding from the back of the stand, meaning this monitor takes up a bit more space than it really should. This wasn’t an issue for us, but it is worth noting.

But what about all those “previously unseen” features?

Ok, so to put it simply, the Samsung C32HG70 revolutionized the gaming screen market. Since it was released, we have seen some big leaps in tech, and that is in no small part thanks to this brilliant monitor.

So, let’s break that all down… 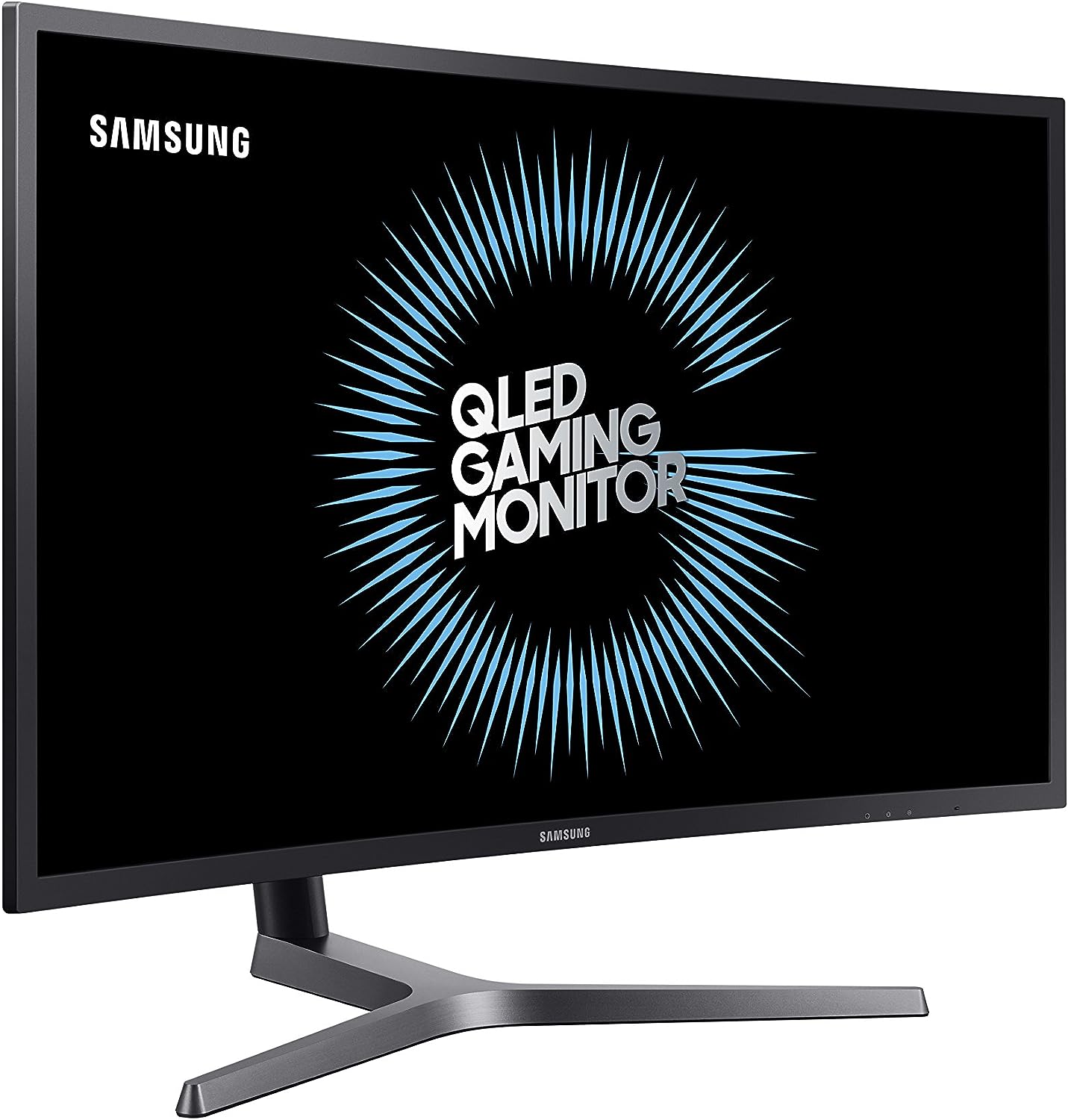 First up the screen, and what a screen it is. 32 inches of VA (Vertically Aligned) gold. The ‘Wide Quad HD’ 2560x1440p resolution may not be the new top of the range 4K, but panels 32 inches or less in size do often run into problems with the newer tech.

Primarily, not all software can scale very well. On all display’s 32 inches or smaller, Ultra HD often comes with a disappointing 125% scaling. This is not an issue with WQHD panels, and at 32 inches, the 2560 x 1440p resolution offers more detail than you could ever want or need.

A quick note on curved screens before we move on…

Curved TV’s were a bad idea, and the whole thought of curved screens took a hit because of this. But curved gaming screens? Yes, please! The level of immersion when using a large curve screen is raised exponentially, and creating a multi-screen setup is easy and crazily effective (if maybe a bit over the top).

The 144Hz refresh rate closely matches how our brain processes images. And when paired with the unbeatable 1ms response time, the results are a buttery smooth mixture of goodness. Topping this all off is the AMD Radeon FreeSync 2 support, which offers gamers “twice the perceivable brightness and color that is offered by the sRGB spectrum without any distortion or visual distraction.” 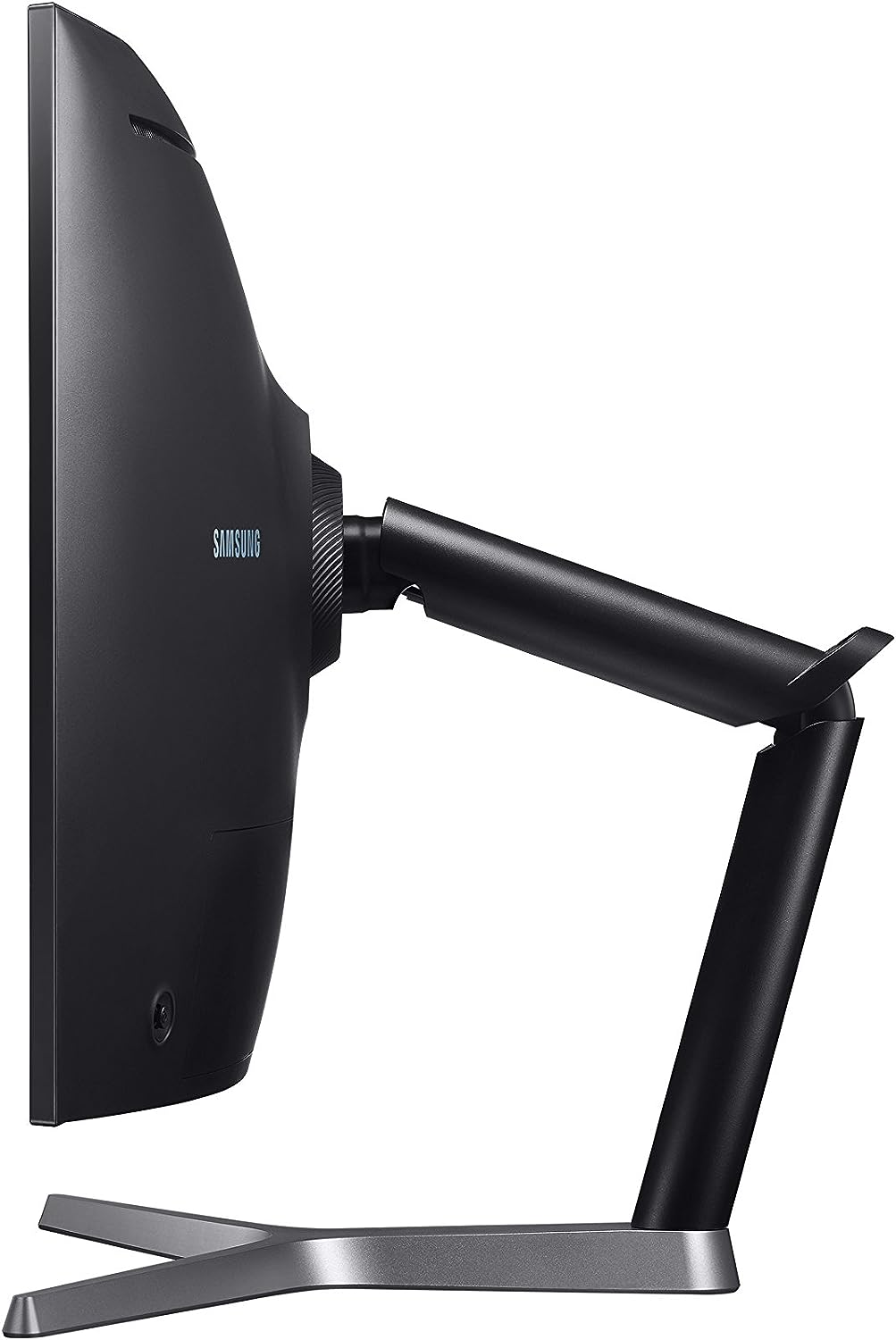 The fact that this is a Vertically Aligned screen means it comes with some inherent advantages – namely, the high contrast ratio. This type of panel is known for its producing the deepest blacks and the most vibrant colors.

And, with the addition of Samsung’s proprietary Quantum Dot technology, the C32HG70 was the first panel to make the claim of delivering a billion shades of accurate color. It’s safe to say that the picture doesn’t get much better than this.

Samsung have been pretty generous with input and output port selection – one DisplayPort, two HDMI 2.0 ports, and two USB 3.0 ports, with the handy addition of a microphone/headphone 3.5mm jack. One slight downside is the positioning of these ports, with the recess being a bit too small, leading to cables bending in uncomfortable looking ways.

The inclusion of HDR (High Dynamic Range) in this screen started a trend we still see today. The combination of the high contrast ratio and solid as a rock brightness provides an enthralling HDR experience.

Nowhere is this better on display than in the opening sequence of the fan-favorite indie classic “Firewatch”. The cartoonish style helps to show off the ‘pop’ when traversing the huge areas of untouched North American forests.

But in the end, fast-paced gaming is what this screen was truly designed for…

And it shows. We are still stuck on “Star Wars Battlefront 2” right now for online FPS (although this is a hybrid third-person shooter as well). The difference between playing through the HDMI port and the DisplayPort is pretty remarkable. With AMD Radeon FreeSync 2 engaged, and the screen running at 144Hz, there are absolutely zero visible tears.

Smooth, buttery, whatever you want to call it – it’s just plain fun to experience.

Pros And Cons Of Samsung C32HG70

If you’re looking for another great monitor option for comparison, then check out our ASUS VG248GE Gaming Monitor review.

Whereas, if you just want to get more comfortable, take a look at our Best Gaming Desks review and our Best Budget Gaming Chairs under 200 reviews.

What else is there to say? Yes, this is now a couple of years-old tech. But that comes with the advantage of being considerably cheaper than the current flagship models. And, when you think about it, this was such a phenomenal product when it was released that it continues to stand up against the new age big guns.

So, if you are on the hunt for a powerful, vivid, immersive, and satisfying monitor to up your gaming experience, then we reckon you should be seriously considering the Samsung C32HG70, our top pick for curved gaming screens that arent going to break the piggy bank!